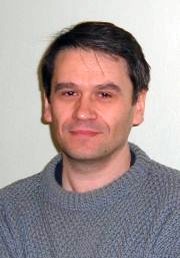 Martin Vlado was born on February 7th 1959 in Košice. He is a graduate of the Faculty of Metallurgy of the Technical University in Košice. He worked as an ambulance attendant in the hospital Vinohrady in Prague, after returning to Košice, he was engaged in science, first at the Technical University, later in the Institute of Experimental Metallurgy of the Slovak Academy of Sciences. Today, he lectures on metals flexion technologies (applications for the technical practice as well as for the art production) at the Faculty of Metallurgy of the Technical University. He published the collections of poems Sparklers / Little Poems into Darkness (1997), Cafédrale / Dream of an Orthodox Coffee Lover (2000), Angelinum Park (2001), Man of a Cloudy Day (2003), Insomnia (2003, with Peter Bilý), Revival of a Flower (2006) and Oil (2011). He published his short stories in the papers SME, Truth, Romboid, Slovak Perspectives (Slovak Perspectives Prize for prose, 2005), then in the Revue of Contemporary Culture, on the internet magazine amnezia.sk and in the Slovak Broadcasting Company. In prose, he attracted attention by his short story book City Hermit (2009).